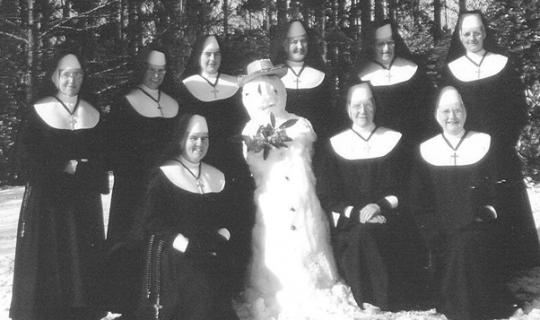 On the 2nd of February, 1857, Agnes Clark, Margaret Byrne, Mary Anne Adamson, Agnes Mary Hart and Margaret Clark became the first five sisters of Archbishop John Bede Polding’s new Australian Congregation. Under the guidance of Scholastica Gibbons, the Order became known as the Sisters of the Good Shepherd, a name which was used until 1866, when it was officially changed to The Sisters of the Good Samaritan of the Order of Saint Benedict.

Our Founders and the Early Years

Apostle in the Saddle

Stories from The Good Sams by Margaret Walsh and the Good Samaritan Archives.

< Module 2: St Benedict and the Rule

Sisters of the Good Samaritan

Update to funeral details for Sr Mary Duffy: due to COVID restrictions currently in place in Melbourne the Vigil for Sr Mary Duffy will now be held at 4pm on Monday 7th June at 4pm, and the Funeral Mass at 11am on Tuesday 8th June. Both liturgies are limited to ten people so it will be invitation only.
We hold Sr Mary Duffy and her family in our prayers. ... See MoreSee Less

Share on FacebookShare on TwitterShare on Linked InShare by Email